Clean marking is now possible for 3D surfaces — including stepped, sloped, curved, conical and spherical surfaces — without the need for additional software.

The perfect solution for applications that would otherwise require precise product orientation before marking or inspecting.

Laser is fully adjustable with a fine detail or deep marking modes to achieve the desired type of marking.

With vision connectivity, the MX-Z2000H-V1 series lets you perform several tasks all at once, including product alignment, marking and verification of the mark produced. That helps you reduce the number of operations, shorten cycle time and cut equipment costs.  The MX-Z2000H Series is great for either deep or shallow engraving in metals, marking on plastics/resins or plastic films as well as fine processing. Mark anything from electronic parts to automotive parts.

Let us show you how

A versatile traceability solution for any industry 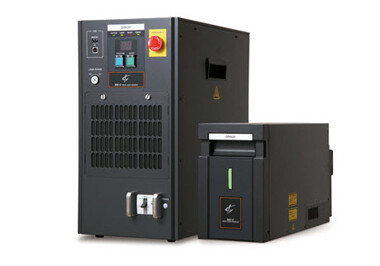 The MX-Z2000H is used in a variety of industries requiring high-volume use, such as:

With new compatibility to the long-life Omron G7SA safety relay for the laser safety interlock, the relay’s lifespan has been dramatically improved, with an ISO 13849-1 B10d rating of 20 million cycles.

In addition, the safety relay can easily be replaced in the event of a failure. Fast restart of the MX-Z2000H-V1 laser after re-engaging of the relay, such as after shutting the door of a laser marker enclosure, helps maximize marker productivity.

With the addition of 16 new EtherNet/IP commands and the twofold size increase of the supported command and response area, the MX-Z200H-V1 now provides increased control options via a PLC. Legacy programs developed for MZ-Z2000 Series markers are also supported, eliminating the need to modify an existing program when switching to the new series.

Precise, efficient, and permanent marking of a wide variety of materials, including metal, plastics, resins or plastic films

A fast, simple and high-quality solution