You are currently viewing the Four major safety-related benefits of robots page. 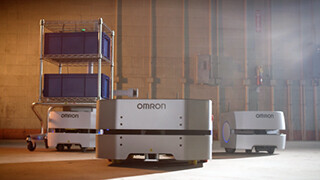 The most obvious and commonly cited safety benefit of robots in the workplace is the opportunity to reduce workers’ exposure to mechanical hazards that pose a significant risk of injury or death. For example, instead of having workers expose their limbs to the hazards of moving sheet metal in and out of a 300-ton stamping press, a robot can assume that risk.

The usual method of dealing with these risks is to install functional safety components, such as light curtains, safety controllers, and the like. By changing the operation to a “no touch” environment, you can dramatically improve your workers’ safety by reducing their exposure to dangerous equipment.

Beyond these more obvious and dramatic situations where there’s a point-specific risk, robots can improve safety when dealing with the more general environmental risk factors in a facility.  For example, loud and excessive noise, high levels of dust, extreme temperatures, chemical exposure all represent insidious and persistent risks to workers.

Most of these risks can be moderated by the proper use of PPE and administrative controls. However, as any safety manager can tell you, these methods aren’t very effective, and they also require constant monitoring. Replacing operators in these environments allows companies to reduce or maybe even eliminate workers’ long-term exposure.

There’s also the added benefit of allowing safety managers to focus on other value-added activities rather than spending their days checking to see if workers have their earplugs and safety glasses on.

3. They reduce the risk of repetitive motion injuries.

Related to the general environmental risks, there’s an increased awareness of the risks posed to workers from ergonomic issues, especially those involving repetitive motion. Simple, repetitive tasks common to pick-and-place operations or minor assembly applications, such as installing screws, are the breeding ground for carpal tunnel or other repetitive motion injuries.

Companies often try to manage these risks via production quota limitations, task rotation or required worker exercises (such as stretching). Fortunately, robots are ideally suited for these types of tasks, and typically a basic SCARA robot can take over the pick-and-place or assembly operations with the greatest ergonomic risks.

4. They contribute to a greater awareness of safety in a facility.

Finally, there’s a renewed focus of creating a higher level of safety culture in the facility. A key element in having an effective safety culture in any plant is the general situational awareness of its employees. Unfortunately, many workers are engaged in repetitive tasks that breed compliancy and inattentiveness.

Workers’ minds can wander if their task is installing the same four bolts on an assembly line for an entire shift. If they become disengaged with their surroundings and then the unexpected happens, they’ll be less likely to notice impending hazards and slower to react to them. That general inattention may be the difference between a near miss and an injury.

Having a robot install those same four bolts for eight hours lets workers perform less monotonous and more engaging activities, which in turn increases their situational awareness and the general safety culture of the plant.

A lot of safety-related troubleshooting requires the input of a safety expert, but what happens when you need answers ASAP and a safety specialist isn’t available? With the right technologies, many sa...

Manufacturing facilities employ a variety of hazardous machines, and safeguarding is paramount. While traditional safety strategies are designed to mitigate risk in hazardous situations, it’s possible...

If not properly safeguarded, machine shop equipment is capable of seriously injuring an operator. Lathes, band saws and other simple machines can cut or even sever a finger or a limb. Due to the major...

As a company that regularly conducts thorough machine safety risk assessments, we’re passionate about making sure our customers are fully aware of the regulations and best practices that are essential...

Making the commitment to retrofit an existing manufacturing facility’s safety system is a crucial first step, and it’s also one of the most difficult. When a facility has been around for multiple deca...

Understanding the difference between standard and safety-rated components

It’s usually quite difficult to tell safety-rated components and standard components apart just by their physical appearance. Although they perform similar functions, there are important factors that ...

Strategies for managing the hidden cost of a safety retrofit

Every industry has its sovereign. In marketing, content is king. In manufacturing, production is the ruling metric by which we determine success. Safety system retrofits often have hidden costs, and t...

Safety standards are evolving, and it’s important for manufacturers to make sure that their machines are compliant without hampering operators’ ability to do their jobs. If the machines aren’t complia...