You are currently viewing the Four questions to ask when selecting a guard locking safety door switch page. 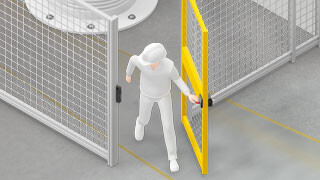 The difference between power-to-lock and power-to-unlock has to do with whether energy is needed to lock or unlock the safety door.

•  Power-to-lock: Energy is required to keep door locked; door is released when energy is removed

•  Power-to-unlock: Door is mechanically locked and can be unlocked by applying energy

Question 2: When should you use a safety interlock with guard locking capabilities?

A safety interlock with only a guard interlocking function lets the guard be opened at any time regardless of the function or status of the machine. If the guard is not closed, the interlocking device will generate a stop command that prevents the machine from starting.

The guard interlocking function, also known as guard monitoring, won’t let the machine start while the guard is not closed at any time regardless of machine status. Because of this and the lack of guard locking function, this type of device can be used in applications when the access time is less than the overall system stopping performance.

For machinery where the stopping time of the overall system is higher than the time required to reach a hazardous area, guard interlocking devices with guard locking capabilities are required. This type of device is ideal for applications in which workers risk being exposed to machine overrun, particularly with high-inertia machines.

Access time can be calculated based on the distance between the hazard zone and the guard together with the approach speed. For further information, you can refer to ISO 13855:2010

Safety of machinery — Positioning of safeguards with respect to the approach of the human body. You can learn more about stop time measurement here.

Question 3: What is the holding force?

The holding force refers to the amount of force a guard-locking device can resist without being damaged. Knowing the holding force is important for ensuring that further use of the device will not compromise its integrity to the point where it will fail to close completely.

Question 4: What’s the difference between auxiliary, escape and emergency release?

Knowing the difference between these things is an important consideration for choosing a door switch device. The first one – auxiliary release – refers to the possibility of manually (by means of a tool or a key) releasing the guard lock from the outside in case of a failure. This feature is not suitable for emergency escape if a person is trapped inside a hazardous area.

Emergency release refers to the possibility of releasing the guard lock manually from outside the safeguarded area without any additional tools in the case of an emergency. This feature can be useful when it’s necessary to help trapped people escape or to fight a fire.

The escape release refers to the possibility of manually releasing the door (without the help of guard locking) from inside the safeguarded area. This feature allows people to escape on their own if they’re trapped inside a dangerous area. Interested in learning more about safety interlocks?

A sturdy guard lock switch with RFID and a holding force of 2,000N, that is ideal for the most challenging applications, including robotic applications.

Cost-effective safety interlocks for high-risk applications that are difficult to defeat and easy to install.