You are currently viewing the Five considerations for mobile robot safety page. 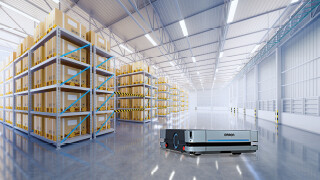 Any organization must prepare for emergency situations well in advance of the actual emergency occurring, and the primary goal is to get everyone out of the hazardous situation as quickly as possible. Mobile robots can complicate this somewhat, since they might still be operating while people are trying to evacuate.

There’s generally no reason to get the AMRs themselves out of your facility. However, they must allow a clear path for humans to reach the exit doors. Make sure that your external alarm system ties in with each robot’s internal messaging system so that they’ll respond by getting out of the way.

Incorrect payload positioning could still make a robot tip over if positioned incorrectly, causing it to become an unproductive tripping hazard. Be sure to consider payload stability as it results from the loaded AMR’s center of gravity, and never exceed the unit’s capacity.

Mobile robot payloads go on the top of the unit, so a fully loaded AMR will have a higher center of gravity than an empty one. The goal is to have the weight be positioned as close as possible to the robot’s center.

Stable stopping depends on a robot’s center of gravity, so a fully loaded AMR will need more time to stop from a given speed. Laser-based area scanners and other sensors help the robot notice obstacles in its path while there’s still plenty of time to stop smoothly.

Manufacturers can also set up zones that allow different speeds for different situations. Stopping distances can be calculated based on how much time a robot needs to stop at its current speed upon receiving a stop signal. You can program zone sets into the AMR area scanners to react to unexpected obstacles depending on level of severity.

Consideration #4: The nature of the surrounding environment

The surface a mobile robot travels upon can have a large impact on its balance and ability to stop safely. Angle of incline and decline, for instance, should be defined by the robot manufacturer, so be sure to not exceed this specification. Surface irregularity, like potholes and clutter, can also be hazards.

Aside from the possibility of an AMR tipping over and spilling its load, a less-than-ideal surface can also make it lose track of its location. If the robot is spinning its wheels inside a pothole, it might think that it’s moving closer to its destination when it isn’t. Since productivity depends on the robot knowing exactly where it’s located, this is a problem.

Consideration #5: Interaction with other machines

In addition to people, AMRs must communicate with other equipment, such as when they need to load or unload parts from a machine. Typically, the machine or the system will send a response to the network, which in this case would be a so-called “fleet manager” that serves as the master planner of the mobile robot system.

A fixed machine can send a signal to the enterprise system to say that it wants a robot to pick up a part. The machine then gets an estimate of when the robot will come. As the AMR approaches the machine, there comes a point where it needs to mute its area scanner, so it’s a good idea to have it reduce its approach speed in case a person gets in the way.

What will the factory of the future look like? This is the question that many professionals in the automation and manufacturing industries are seeking to answer. While most proposed descriptions are l...

Get to know our top three trends in sensor innovation

At Omron, we’re always working to expand the limits of what’s possible with sensors. Presence detection — whether through proximity, photoelectric, or fiber optic sensor technology — is crucial for al...

What goes into building an IO-Link system?

One of the easiest ways for manufacturers to transform their operations with IIoT capability is to use IO-Link. This internationally accepted platform allows sensors to go beyond a simple ON/OFF readi...

How IO-Link improves predictive maintenance and speeds up sensor reconfiguration

One of Omron’s main focuses with respect to sensor innovation is to incorporate more “intelligence” — that is to say, more ways to gather meaningful data — into our latest sensor lines.